Posted by Unknown at 4:55 PM No comments:

Will Bed Bugs Bite at the London Olympics?

Author Cameron Webb Clinical Lecturer and Hospital Scientist at University of Sydney Disclosure Statement Cameron Webb does not work for, consult to, own shares in or receive funding from any company or organisation that would benefit from this article, and has no relevant affiliations. The Conversation provides independent analysis and commentary from academics and researchers. We are funded by CSIRO, Melbourne, Monash, RMIT, UTS, UWA, Deakin, Flinders, La Trobe, Murdoch, QUT, Swinburne, UniSA, UTAS and VU. Articles by This Author 18 July 2012 Will bugs bite at the London Olympics?
Posted by Unknown at 5:40 PM No comments:

Is your Lawn Holey? 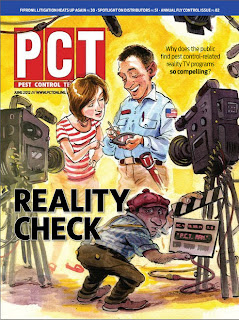 
It’s difficult to channel surf these days and not stumble upon a reality TV show where pest control is involved. Whether pest control is the topic of a TV series, as is the case with “Billy the Exterminator”; “Verminators”; and “Ratbusters” or an important component to a program (e.g., “Hoarding: Buried Alive” or “Infested”) there is no denying that the public enjoys watching pest control on television.

PCT wanted to find out just why this is the case, so we reached out to a cross-section of industry professionals — many of whom have appeared on these reality TV programs or were involved with programs that never aired. Their answers paint a clearer picture as to why pest control and reality television have become such a perfect pairing.

“I CAN TOP THAT.” The next time you’re around a group of people – any group of people – bring up a recent pest encounter and observe what happens. “After one person tells a story, the next thing you hear is someone else in that group say, ‘Oh yeah, I can top that,’” said Mike Masterson, president of Isotech Pest Management and star of the reality program “Verminators,” which aired in the U.S. from 2008 to 2009. “I don’t know of one person who has not had a memorable pest encounter.”


EXERCISING THE MIND. For many viewers, another appeal of pest control reality television is the opportunity to learn about another profession. Jimmy Tallman of 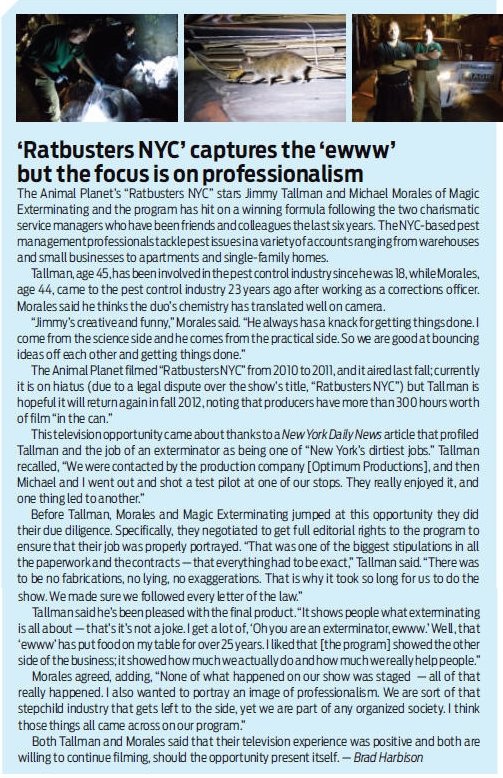 New York-based Magic Exterminating, and star of Animal Planet’s “Ratbusters NYC” said he’s been “taken aback” by the public’s interest in pest control. “When I would describe a day’s work to my friends they would say, ‘You’re full of s***,’ but now that it’s been on TV, they say, ‘Wow, you really do that.’”Tallman said friends, acquaintances and others  have a new-found respect for the profession. “In one episode, we went to clean up after a raccoon that was supposed to have already been removed. Lo and behold, there was the raccoon in the ceiling. We had to
use a snap pole to trap him, and he was screaming and urinating as we got him out. After that episode aired people came up to me and were just amazed that that stuff really happens.”

THEN YOU HAVE THE "ICK FACTOR" as Missy Henriksen, executive director of the Professional Pest Management Alliance, refers to it. “Roaches, spiders, rodents, bed bugs, bats and snakes are the types of things that invoke fear in many,” she said. “For much of the public, watching how skilled pest management professionals tackle extreme infestations of these scary, disease-carrying pests satisfies a morbid curiosity.”

EXTREME BEHAVIOR. Another reason cited for the public’s interest in pest control related reality programs, is the public’s curiosity with extreme behavior, including hoarding.

PERSONAL CONFLICTS. Another facet of a pest control operation that viewers can relate to is employee dynamics. As anyone who has worked in a pest control business can attest, the environment is a hodgepodge of people from different backgrounds with varying levels of education. The work can be tedious and, at times, physically demanding. On top of that, it is route-based work, where on-time service is a must. All of these factors can lead to stressful and, sometimes, drama-filled situations.

A PERFECT STORM. So just why has pest control-related television programming piqued the public’s interest in recent years? It’s really been “a perfect storm” of circumstances. Cable and satellite television now offer far more stations than they did as recently as 10 years ago, meaning they are thirsting for programming. Producers have found a winning formula with reality TV programs that both educate and entertain. And pest control is much more in the spotlight thanks to bed bugs. It really shouldn’t, then, come as a surprise that pest control and reality television have made for such a perfect match.

The author is Internet editor and managing editor of PCT and can be contacted at bharbison@giemedia.com.
Posted by Unknown at 10:59 AM 1 comment: