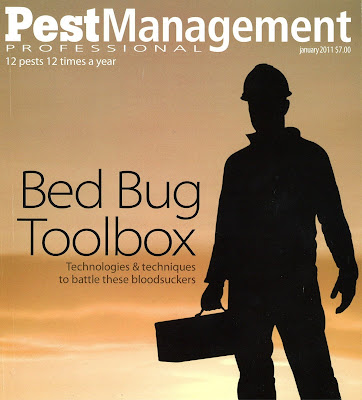 Magic would like to recognize Lynn Frank BCE Technical Director at Suburban Exterminating for co-writing an article in this months Pest Management Professional magazine.

The article highlights include:
•When, where and how these tenacious pests are occurring
•Practical Bed Bug Tips for pest control technicians
Great article Lynn and congratulations.

The full article can be read here Pest Management Professional
Posted by Unknown at 12:26 PM 2 comments:

How not to let the bedbugs bite

by Barbara Turnbull Reprinted from The Toronto Star February 18, 2011 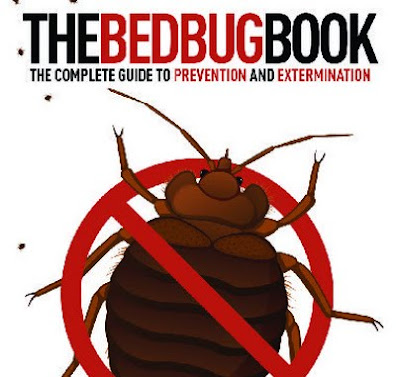 bedbug is in a class of its own. They’re tiny, tenacious and love to travel.

Humans have been tormented by insects since we first entered caves — but the (released this week by Skyhorse Publishing). The New York-based entomologist makes a strong argument that we shouldn’t let sleeping arthropods lie — even if our own sleeping quarters aren’t infested. He wrote the book, he says, to “intrigue, horrify, entertain and be useful.” It is chock-full of the history of the bedbug, its life cycle and its current place in our ecosystem. Most importantly, it is a useful guide to prevention and treatment.

The key, he says, is vigilance — and to make simple changes to thwart them. He says one reason our forebears put legs on beds is to keep our bedding off the ground and away from the bugs. We’ve forgotten that, and today often put bedskirts under our mattresses — providing a perfect ladder for bedbugs to climb up and move in.

What follows is an edited version of the Star’s recent telephone interview with Maestre.

You say there is no other pest like the bedbug?

Because of the fear it induces in the human psyche. Even when an infestation is gone, there’s a lingering psychological recovery period of up to six months. It brings a lot of deep nightmares to the forefront.

Maybe it’s because they’re in our beds while we’re sleeping?

It’s also how we perceive the bedbug. If you have them you feel shame — because at some level you think it means you’re dirty or you’re poor or you’re not a good housekeeper. And if you have an allergic reaction it can feel like you’re being bitten again and again.

These were long periods when they went under the radar and you didn’t hear much about bedbugs.

There’s many reasons for that. Many people thought that DDT wiped them out, and that’s not necessarily the case. Our appreciation of the importance of sanitation and the proper disposal of garbage helped. We changed — our furniture changed, our lifestyle changed, the way we did things changed. Then when they went away, we changed back. Now that this pest has returned we have to start thinking along those lines yet again.

Is pest management busier now than ever?

It’s a growing industry because the population continues to grow. But world travel is also allowing all sorts of new invasive species to enter the country, and bedbugs are just one.

What we’re doing wrong is panicking. There is absolutely no need. What we’re doing right (and it’s started in this past year) is that there are many people in the pest-control industry and government who are performing the research necessary to control these pests and educate the public. It’s vigilance that’s going to be the key to all of this: education, learning what they are, what they look like. Slowly but steadily, government is coming into the picture and realizing what steps are going to be needed to really help society.

You recommend checking for bedbugs everywhere. Do you really check every seam of your coat and every seat before you plant your butt?

I’m not talking about taking 15 minutes, but as you’re putting your coat on take a look-see on the outside, on the inside, stick your hands in the pockets and pull them inside out. And just that little bit, which takes maybe 10 to15 seconds is probably going to be enough. If you know the location has had a bedbug problem then you want to be more thorough. If you’re staying in a hotel absolutely go through everything. If you go into a movie theatre, go through everything a little more thoroughly than you normally would. If you’re taking the train or the bus, take just a quick look-see.

Travel seems to be a big culprit.

One person may introduce the bedbug into a hotel room and then the next person is in the hotel room the next night. They may pick up one or two of them and then leave. Then a third person checks in. The exposure becomes exponential. That’s why vigilance in that situation is so important. It may take several days before the hotel itself becomes aware that there’s a problem in the room and reacts to it.

So there’s still much to learn about these guys.

They’re doing so at university levels all the time, learning about the behaviour. One example: There are 10 to 12 different pheromones that will attract bedbugs. Most males and nymphs (young ones) will congregate in and around that area, and so do females that aren’t pregnant. But for those females already pregnant, it acts as a repellent. That’s why no one has been able to come up with some sort of trap, like a roach motel, to attract bedbugs. You’ll catch some, but you you’re not going to catch all of them.
Posted by Unknown at 4:08 PM No comments:

On Tuesday, Chuck, one of our salespeople, dropped by my home with a sample he collected from a home on the North Shore of Long Island. He wanted me to confirm his identification of the insect. He had about a dozen live winged specimens which meant they were reproductives of some sort. Upon closer inspection I immediately noticed the four equal sized wings and under a magnifying glass I could see that the body only had two segments.

Termites I responded. Let me bring them into Ralph our Board Certified Entomologist for confirmation. Ralph slid them under his digital computerized microscope and sure enough Termites. Ralph told me that the earth is water saturated due to the melting snow and the sunshine Monday and Tuesday combined with the radiant heat of a homes foundation tricked the Queen into believing it was spring and sending out the swarm of reproductives.
I was excited because this was the earliest Termite swarm I had ever heard of.
Be on the lookout... Termite season will probably come early this year.
Magic offers the Sentricon Termite Bait System and conventional liquid treatments.
Posted by Unknown at 1:50 PM No comments: 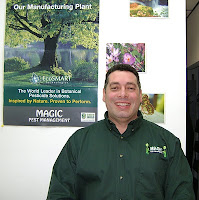 The Complete Guide to Prevention and Extermination
By Certified Entomologist Ralph H. Maestre

Magic is proud to announce that our very own Technical Director Ralph H. Meastre BCE has published his first book. All of us have benefited by Ralph's expertise in Termites, Rodents, Ants, and especially Bed Bugs.

In the book Ralph goes through Bed Bug case studies detailing how people got them, how Magic eradicated them and the advice given to prevent the return of Bed Bugs.

Ralph will be appearing on Good Morning America February 23, 2011 and will be interviewed around the country on an ABC Satellite Radio Tour February 24, 2011.

Below is the official press release from Skyhorse Publishing:

FOR IMMEDIATE RELEASE
CONTACT: Esther Bochner
ebochner@skyhorsepublishing.com
212 643 6816 x 224
ARE YOU SAFE FROM BED BUGS?
EXTERMINATOR RALPH MAESTRE SHOWS YOU HOW TO PROTECT YOUR HOME AND YOUR FAMILY!

“They were everywhere. The bed bugs were in the dentures, toothbrush, dressers, ceiling, walls, baseboards, sofa, dining room table, inside groceries, and in a picture frame of The Last Supper.”
- From a cast study in The Bed Bug Book
Bed bugs were believed to have been eradicated in the 1940s and ‘50s, but after a 1972 ban on the use of DDT, the dreaded insects are now reaching epidemic levels! Recent high-profile infestations include the Empire State Building, apartments at the University of Texas at Dallas, the New York City Department of Health, and the Victoria’s Secret and Elle Magazine headquarters. Outbreaks have occurred in Cincinnati, Denver, Los Angeles, Phoenix, and hundreds of other cities throughout the country. No tourist attraction, department store, or home is safe from these creepy, crawly, pesky vermin. Are you prepared?

In The Bed Bug Book, board certified entomologist and practicing exterminator Ralph Maestre provides answers that will protect you, your home, and your family from catching bed bugs, and educate you about how to get rid of them and prevent them from coming back if you’ve already gotten them.

Some of the vital advice that you will read inside includes:
• There is no silver bullet for bed bugs. Despite public wishes, there is no one pesticide that is easy to apply, needs only one application, is safe for the environment, and has no ill health effects on humans. It is important to constantly be alert to signs of bed bugs, and educate yourself about how to maintain a bed bug-free home, spot them if they do appear, and find an extermination method that is safe for you and your family.
• Throwing out your mattress does not solve the problem. This is an extremely common misconception. Bed bugs migrate off the bed and hide in cracks and crevices in the room.
• The importance of being alert while traveling. One of the most common places for families to get bed bugs is on vacation. Practical things that you can do to prevent this from happening to you are: inspect your luggage on every step of the trip, inspect your hotel room before use, and launder all clothing as soon as you get home.
• Picking the right pest management company is key. Choosing the right exterminator for you is the best way to make sure that the bed bugs are really gone. Pick an exterminator that has been around for a while. Make sure their personnel are certified and have insurance. Ask if they have an entomologist on staff or on retainer for consultations.
• The government needs to step in and help. With the bed bug situation in this country getting worse by the day, the government needs to step in and help its citizens learn about and solve the problem. They should provide education on identification and common treatment methods. They should provide grant money for research and support individuals in need of assistance who can’t take care of the problem, such as the elderly. It is only with steps like this that we will begin to see a real change in the state of bed bug infestation.

In The Bed Bug Book, based on years of pest control experience, Maestre provides real case studies of people and places where he found bed bugs including: why the people he describes got them, how he exterminated them, and the advice he gave the residents to make sure they didn’t come back.

It is absolutely VITAL that the American public read this book and begin making smarter, more educated choices that will begin minimizing the extent to which bed bugs plague this country! With Maestre’s help, we can all take comfort and pride in living bed bug-free lives!


About the Author:
RALPH H. MAESTRE is a board certified entomologist in urban and industrial entomology. He received his BA in environmental science with a minor in biology. Maestre has been a New York State certified commercial pesticide applicator since 1987. He is currently supervisor of pest control technicians at Magic Exterminating in New York City.

To schedule an interview with Ralph Maestre or excerpt some of the tips inside please contact: Esther Bochner / 212 643 6816 x 224 / ebochner@skyhorsepublishing.com